No posts for a couple of days since arriving in Champoluc due to issues with internet.
We arrived on Tuesday with freeskiing on Wednesday.
Wednesday - It hasn’t snowed for a while here but there’s still a fair amount of soft snow and powder around for playing in (balance and coordination work!).
Thursday saw another sunny day with later start and tech work, followed by slalom gate training above Champoluc after lunch. As the races have been moved, we’re having to train after the local club which means after lunch. This has given us the opportunity to do tech work first then gate training.
Today was another day of slalom gate training following on from tech work prior to lunch on a great piste in the sun. The boys are skiing well and are prepared for the slalom. With tomorrow being new years day, we have the training piste from lifts opening so we’ll be out  early in the morning. That means possibly muted celebrations tonight but it’ll be worth it for a good mornings training.
Happy new year to everyone! 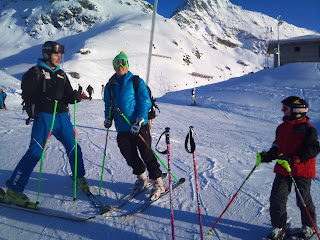 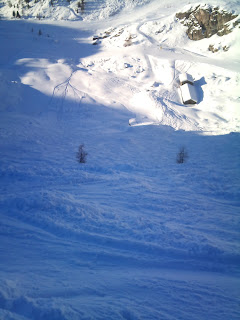 Yesterday saw the slalom event of the ISSC races. We awoke to about 20cm of fresh snow in the village.
This was over 30cm at the level where the race was to take place.
Unfortunately, the communication between the race organisers (BaseCamp) and the ESF who were setting the course was not particularly good and the course set was completely unsuitable for the conditions and skiing ability of most of the field meaning that there were a lot of issues with racers falling, not finishing and generally struggling.
The Surbiton girls performed pretty well with Emma coming 3rd after the first run.
The second run was set (Much better set than run one) but the conditions were far from ideal and with the chief of race falling whilst slipping the course and having to be stretchered off, the 2nd run was cancelled.
This meant that the parallel slalom was to be run on one of the pistes at village level for safety reasons.
With the visibility and conditions far better lower down, this promised to be more successful than the earlier slalom.
Unfortunately, the organisers were not too good at seeding the teams and the Surbiton girls were seeded in a group with the other top girls team and lost that particular race meaning they did not progress to the knockout stages.
Despite this, the group were very successful given that all but one had not raced on snow prior to this competition. The one race that had experience, won the overall girls title.

Now to return to the UK for Christmas and then out for the BARSC and Anglo Scottish races on Dec 28th. (If I can get back...currently delayed at Geneva due to the snow in the uk!)
Posted by Phil Brown at 12:10 No comments:

No Post yesterday as the entire internet system in LDA was down. We had a free ski day so that the Surbiton Girls were relaxed and ready for todays GS race.
Today, the ISSC races started with the GS and the girls did get some great results. Emma was fastest Girl and 2nd overall, Amelia was 2nd girl and 3rd overall and Meriel was 4th Girl. This is pretty good, considering that Emma is the only girl with us to have raced before. It looks like the training in Tignes in October paid off!
We also believe that the girls were the fastest girls school team and seem to have done very well overall as a school but these results are not released yet. we'll find out at prizegiving tomorrow evening.
Tomorrow brings the slalom and parallel slalom so hopefully we can build on todays excellent results. 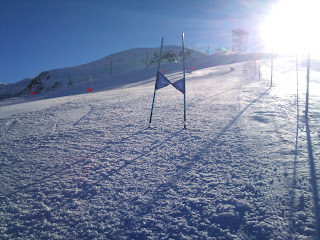 Giant Slalom Training In The Sun

Today was another clear (and cold) day with perfect conditions for training.
GS today wit the Surbiton girls building on the skills from their October camp in readiness for the races later in the week. The way they're skiing, we're hoping for some success in the races.
Gerard took a one run break from coaching to have a run in the course, much to the amusement of the cameraman - Gerard GS Run
A brief free ski after lunch, followed by ski prep for slalom tomorrow. 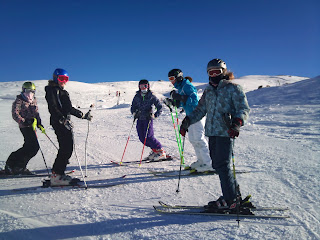 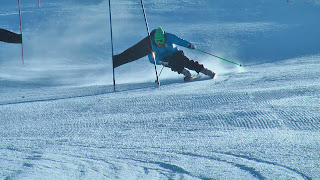 Another windy day in Deux Alpes

This morning started badly - high winds meaning that most of the lifts were closed. Only a couple of lifts at village level were open and they were packed! So we were pretty pleased when the village chair opened to get us up to the area where we've been training.
It was a bit of a trek to get there but we got set and started slalom training just before lunch. I don't know whether it was the shedload of drills we did during the morning but the guys skied the best they had all week! Very pleasing for their last day of this camp...and the wind died down for the training. 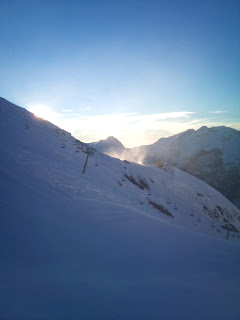 Today brought much colder temperatures and hard snow which was more conducive to slalom training after the soft snow of yesterday.
The day started with the cloud coming in and out but after a while the cloud disappeared completely, leaving us able to get some good quality training in.
Tomorrow is the last day for this group so fingers crossed for another good day. 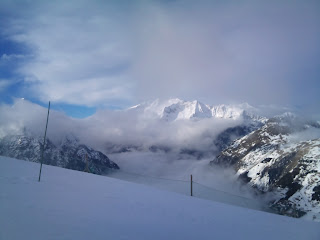 We finally got up onto the mountain today (in dry-ish conditions) to get on with some technical work ahead of any gate training for slalom which we've planned for the week.
Snow was still a bit wet lower down and soft higher up but we found a piste in the middle that was firm enough to facilitate the training we wanted to do.
So gates tomorrow, as long as conditions allow!

After the high winds closing most of the mountain yesterday, when I woke up today, It was pouring with rain. It hasn't stooped all day in the village. We ventured up the gondola and it was snowing much higher up. After about 3 runs we called it a day as the rain lower down was relentless. Temperatures are set to fall again mid-week, and with a bit of luck there won’t be too much damage to the lower slopes. Hopefully will be better tomorrow and we can get to training.
Posted by Phil Brown at 16:17 No comments:

Well, the first day in Deux Alpes did not go as planned, High winds and snow caused the mountain to be shut and just the nursery runs open, what to do?
Hire some boards and make fools of ourselves! that was hard work, but fun.

see how we did here: Beginner Boarding in Deux Alpes
Posted by Phil Brown at 21:31 No comments:

In Tignes this week running a course called 'Taste of Race' for Inspired To Ski.
The week has gone very well with a bit of everything weather-wise.  Yesterday was snowing and had been for over 24 hours.
Today it cleared and was sunny, giving us a beautiful day and great snow for training. The only common denominator all week has been the cold. it's pretty baltic here!
1 more day of the course left then off to Deux Alpes for an Impulse training week.

Late start today for the slalom leg of the super combi.
We were up on the hill at 14.00 for a few runs through the warm up courses, followed by a 15.30 inspection as it started to get dark.
Inspecting what was a very open course on a pretty flat slalom hill. We weren't too surprised to be called out to re inspect the boys course as some gates were over the 13m maximum. So, two inspections and a long wait whilst the girls run was completed.
A lack of copies of the start list caused confusion at the boys start and delays. Despite this Matt managed a pretty tidy run (even with his pole breaking on the top gates). As I write, we're still waiting for the results to be collated.
That's the camp in Norway nearly done and we fly home tomorrow afternoon. Next training camp will be 4-11 December in Les Deux Alpes.
Posted by Phil Brown at 19:38 No comments:

2 Super G races in Hemsedal today. The second one was part of a super combi with the slalom to run tomorrow.
As with the other races on this camp, we've been teaming up with the Scottish team and Ambition, so, with 6 coaches on course, we had all the gates covered with video and feedback.
Matt got his outside ski caught on the pitch in race one and made a recovery but this made him late coming onto the flat. The result was ok considering this.
Race two was much better with Matt skiing strongly to complete well.
Onto the SL tomorrow afternoon, giving us a well deserved lie in after the 6 am wake up and 10 hours on the hill today.