So today saw the Super Combi and Junior Super G at the British champs in Meribel.
With our 5th of 13 early starts, we got off to a good start in the Super G leg but were subject to a few delays during the race making the SL delayed in starting.
Impulse and British team racer Matt Thompson was lying in 3rd place in the juniors after the super g but was unable to capitalise and improve on this as he got caught on the first steep pitch and straddled in the slalom.


Good news for the BSA group racing with us this week, Laurie Taylor picked up 3rd place J1 in the super combo with a great slalom run helping him on the way. 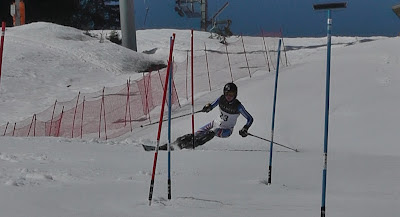 That's the speed races finished here now and they've been some of the best that we've had here in my memory. Tomorrow we switch to the tech races with the mens national champs GS and a womens national champs SL. We should be seeing British team member Dave Ryding in action, recently scoring a win in the Slovenian champs and another result with a sub 10 point score.
Posted by Phil Brown at 15:54 No comments:

Email ThisBlogThis!Share to TwitterShare to FacebookShare to Pinterest
Location: Méribel

Back to business for Matt Thompson

It's been a while since I've blogged. what with poor internet etc. but we've had a good few weeks training since the Interschools.
On the third day here in Meribel, we saw the Junior Champs Downhill race. For the first time in several years, we were able to watch a full length DH with the finish at the bottom of the Stade. Great for the spectators with three huge turns from the ridge to the finish.

It was great to see Impulse member Matt Thompson, in his first DH this season, take the junior title and close the gap on TJ Baldwin from when they've raced here in previous years. Matt was closely followed by Roy Steudle, who was faster in yesterdays training run.


The course proved tough for many of the less experienced trainees but most of them performed well with Impulse racer Ed Fenton-Fowler completing his third ever (and toughest) downhill with a decent time.

Unfortunately, with TJ being so far ahead of most of the field and the high penalty, the points were't the best but the guys are just going to have to get faster!
In the spirit of cooperation that many of the clubs need to survive and attend these events, we've had a couple of juniors from BSA staying with us and it was good to see one of them, Laurie Taylor, picking up 3rd J1 in only his second DH!


Well, that's 3 days done of this 13 day programme for the British and Scottish champs. That means another 10 sunrises to view over the three valleys as we need to have early starts in order to make the most of the best racing conditions of the day.