English champs - podiums and wrap up

Well, the races finished on Friday - Apologies for the delay in updating but the internet connection has not been ideal to say the least.
Impulse picked up several podiums at the champs including those by the following racers:
Matt Thompson
Charlotte Jesse 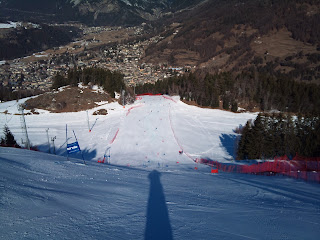 All of our Junior racers achieved points improvements over the week, to their credit and we had one child racer, Tom Grant, who achieved 19th place in the Childrens super g from a start number in the nineties and in his first super g race.

Well done to all of the racers with us for the last week or two weeks.

No racing now until the Interschools in a couple of weeks. I'm just working at the SIGB ski test in Bormio this week and having a bit of fun.
Posted by Phil Brown at 22:41 No comments:

A few days here so far. No blogs up to now due to internet issues.

Sunday saw the NJR slalom with Impulse having 9 boys and 1 girl racing. Conditions were variable, with the cloud and snow closing in for run two. The course was fairly choppy for run two and all but one of our guys completed, scoring reasonable points scores. Most weren't happy with their performance as they could have made better scores but, on the whole, a good day for the team.
Monday was the NJR GS. Fortunes were similar to the slalom with the second run becoming pretty bumpy. The team all did pretty well again with points improvements for most of the them. 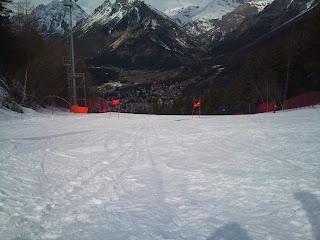 Today we held the FIS super g. The course was set fast and was great for those racing. The snow didn't run amazingly fast but was very grippy, catching a few people out. Impulse had a couple of first places. Judy Reid won the masters and Matt Thompson was first British competitor. 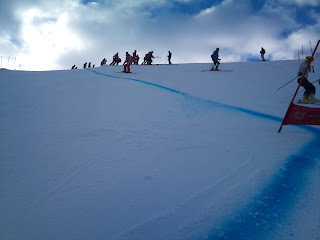 FIS GS, Childrens GS and Minis GS are all running tomorrow, so reports on these in the next blog.
Posted by Phil Brown at 16:56 No comments:

The boys raced slalom yesterday and had mixed fortunes. Starting wit bib number 76 and 82 respectively, both Hubert and Sean went out of the gate pretty positively on the first run.
Hubert hip slid in the middle section of the course but got up and continued to make it into 62nd position. Sean hooked a tip about half way down, unfortunately finishing his race there.
The 2nd run saw Hubert move up to 42nd place. A pretty good move from start number 76! 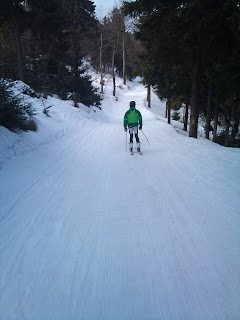 The guys had no competition today so we had a rest day and went to watch the ice hockey final between Finland and Russia. The Russians won on sudden death in extra time after a full time score of 1-1. That was unfortunate for the fins as they had played a better game generally.
Tonight saw the closing ceremony with Victoria Bell carrying the flag for Ireland.
Tomorrow sees us travel down to Bormio for the start of the English Champs for a week. Next blog on Sunday.
Posted by Phil Brown at 23:18 No comments:

Yesterday saw the boys GS race her in Liberec. The Irish boys started the day well with start numbers of 70 and 78, finishing the first run in the 60's so moving up a few places.
Unfortunately, they had issues on run two, Sean got caught on his inside ski and on the slick race piste there was no coming back. Hubert started well but had an issue with his ski as it pre released on some judder ruts so a disappointing day all round. 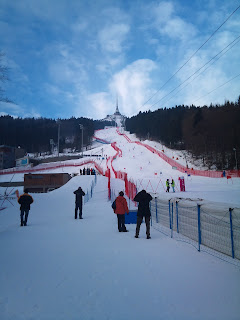 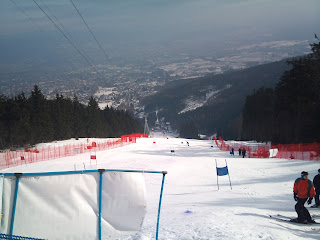 Today was girls slalom and Tori started with bib number 75 and finished the first run in 58th. A good performance on a very icy piste. In fact it was difficult to get an edge when inspecting, never mind racing!
second run saw her move up to 48th spot and a decent finish for the only Irish female competitor.

Tomorrow sees the boys slalom and final event for us here. The boys go numbers 76 and 82 so lets hope for some good moves up the field.
Posted by Phil Brown at 20:00 No comments:

Girls GS day at the EYOF

Yesterday was a rest day after a late arrival on Saturday. The opening ceremony was last night, with the lighting of the Olympic torch. 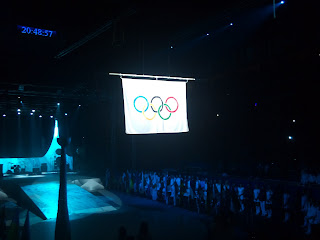 Today was the first day on the hill and the girls GS day.
Only one competitor for us as Kristen injured her knee training last week. Tori went at no. 70 on run one and completed respectably in 62nd place, hoping to improve further on run two. The piste was pretty slick and rock hard so it took some guts to attack but those who did were rewarded with decent results (if they stayed in!). Tori headed out on run two and was going well up toward the first terrain break, where her ski pre released, brining her challenge to a premature end unfortunately. 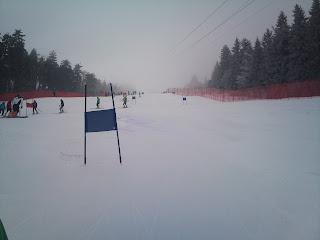 Tomorrow sees the boys GS with Hubert and Sean competing with bib numbers 70 and 78. Good luck to them for their race.
Posted by Phil Brown at 20:19 No comments:

Last Monday saw my departure from Turkey. Three flights to get to Geneva and then up to Les Houches for the training week to precede the European Youth Olympics.
Training with the four athletes over the week in near perfect training conditions each morning should be good preparation for the event in Liberec, Czech starting from tomorrow.
A big thanks to BSA for their help in running this camp from their base in Les Houches. 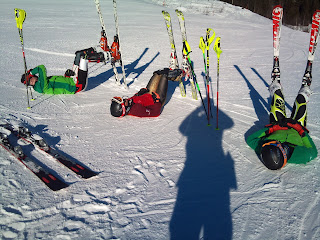 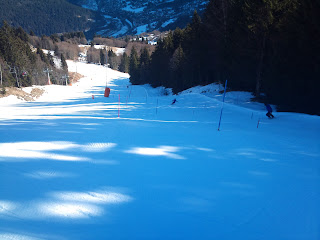 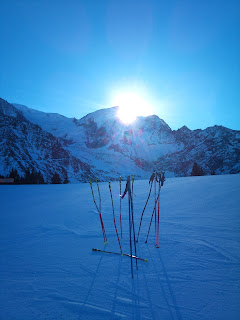 Blogging from the cafe by the race piste prior to todays ladies slalom.
Beautiful sunshine out there today but still very cold. Very similar conditions to the ladies GS a couple of days ago meaning the girls have had the best of the conditions so far. A stark contrast to yesterday when we arrived to find cloud, light snow and flat light for the boys GS.
This made yesterdays race a challenge to say the least. Out of two Irish boys, only one made the second run. The GB boys fared better, only losing one of five on run one.
The boys had a tougher time on run two, with the conditions softening, creating ruts which weren't visible due to the flat light. This caused most of the boys later in the field to make mistakes. There were a few fallers but Team Irelands athlete completed, as did all but one of the remaining GB racers.
Two more days of racing with the womens SL today and the mens SL tomorrow, followed by the closing ceremony.
I'll be reporting on the next two days events on Monday whilst sitting at either Ankara or Istanbul airport on my way back to more traditional ski racing venues.

Well, we’re on our third day here at the Universiade in Erzurum and we’ve managed 3 runs between the other races. Only the one piste open and that’s being raced on so, on Tuesday, we managed to have a ski above the combi sl for 3 runs. 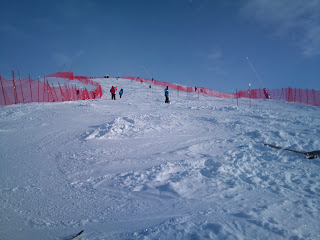 Conditions on the hill have improved immensely with clear skies bringing sunshine and baltic temperatures (Glad I have my boot heaters!) which has the race piste in great conditions. My guys from Ireland don’t race until their GS on Friday so I’ve been up on the hill watching the races. Today was the super g leg of the super combi. Tomorrow sees the girls GS.
Hopefully the conditions will remain good until the end of the races on Sunday. 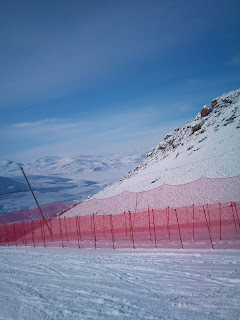