Overdue update and a trip to Italy.

I've not put a post up since the end of our first week in Tignes, with one group just finished and we were waiting for another.

Well, the second weeks group arrived and were mainly made up of Irish trainees (19 of them!) out on a selection camp for the World Schools Champs (being held in Gressoney, Aosta, In March).
We had a good few days of GS training with some improvements being made by the guys, once we'd sorted out some of the kit. We had 50kg guys turning up with 140 flex boots! At least we had Jules from the Boot Room (Chamonix) up here and on hand to help with the boot issues.
The planned slalom training didn't happen due to the glacier being stormbound on that day so the guys left on November 6th having done some worthwhile GS.
The storms that shut the glacier brought us some fresh, and very welcome, snow for a few days off and a bit of R & R for me. 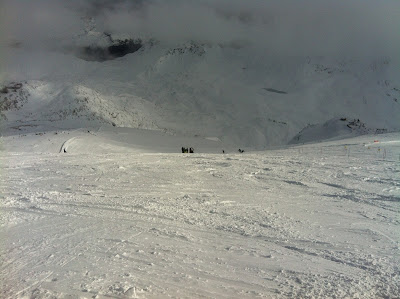 So after a few days relaxing and free skiing, we headed off to Aosta to check out our base for the winter and to have a sneaky trip to the Milan International Motorcycle show which is the biggest of it's kind with a lot of new models on display and some great displays outside the halls.
Firstly though, we stayed in the centre of Aosta in the Hotel Europe which was very nice.
After a nice meal we were set for the trip to Milan, via our base which is looking good for the winter, sitting up above Aosta town with some amazing views (below) and still only 10 minutes from the main Pila Gondola! 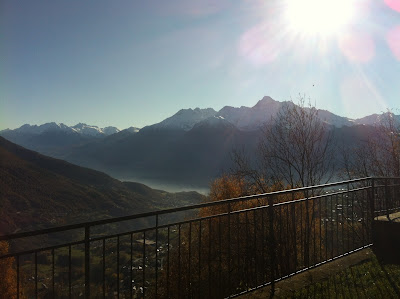 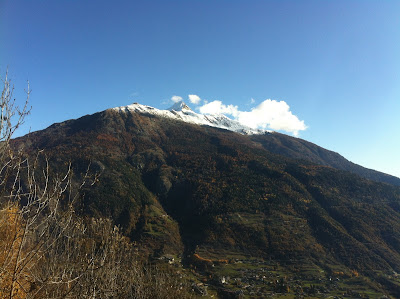 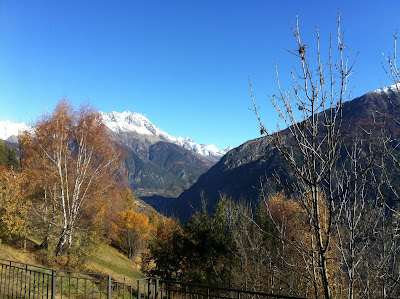 So today was back to business as usual with some SG training on the glacier in preparation for the 2 mens SG races this week and a DH on Friday. We've got one athlete out so he's pretty spoilt as far as training and feedback are concerned.
At the end of the week it's off to Ireland for a few days to shadow a coaching course for me, then back out here to Tignes where, hopefully, we may see snow start to fall in the villages.
Posted by Phil Brown at 17:55 No comments: