Great Conditions and training in Tignes!

This last week has seen the first block of training for us up on the Grand Motte in Tignes. 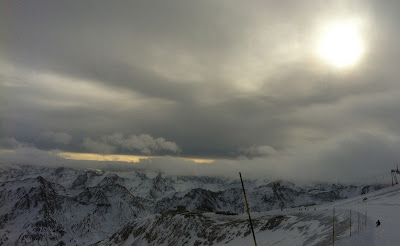 With a reasonably small group for week one of 14 and 3 coaches, we had an awesome weeks training with only one day lost due to high winds on the glacier. The rest of the week saw mainly sunny skies and great snow with only one morning starting in the cloud.

The conditions worked in the athletes favour, meaning some great work being done, leading to meaningful improvement for all of those training here.
Yesterday saw the departure of the first group and arrival of a small number who are training over the weekend. This morning, we headed up to set slalom for just two trainees and were asked to team up with another club. It turns out they only have two trainees but they're some of the best in their region. The Comite Du Mont Blanc. This gave our guys something to aim for! 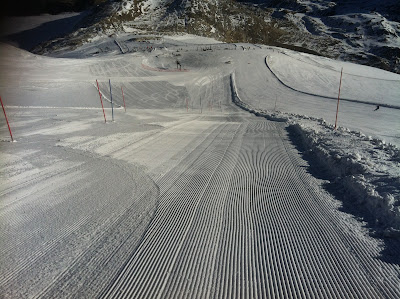 Next group arrive tomorrow with 19 trainees from Ireland and two more coaches so it's going to be a busy week, with more snow forecast for mid week to refresh the glacier we're looking forward to it!

In the last few days we've had a load of new kit arrive for the season.

On Saturday, we picked up a load of brushgrip bases to replace the screw in's on most of our gates. This will make our coaches job easier this winter, and make setting much quicker with no keying in. Thanks to Ski Bitz for these and the discount they're offering for Impulse club members. 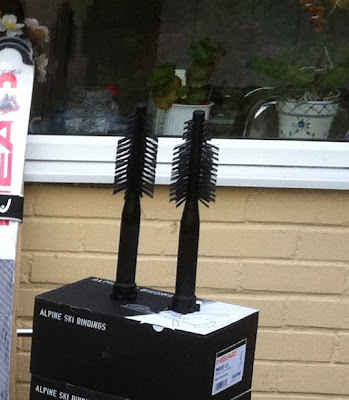 Then yesterday, a few boxes of Skis and boots for the coaching staff arrived making us a happy bunch.

A BIG thanks to the guys at Head UK for this lot. Not just race skis in there either. There's a few 'toys'. 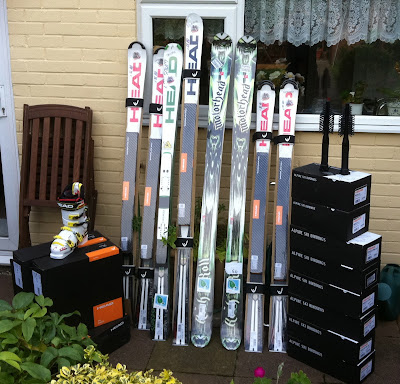 Still lots to do before we travel out to the mountains later in the month, including setting up for the London SKi and Board Show at Earls Court next week - Come and visit us on Stand J1 (The Valle D'Aosta Stand), just as you walk into the exhibition hall. We'll also be in Birmingham, the following week at the British Ski + Board Show!

We've just come back from Kilternan, near Dublin, where we attended the Irish Champs.
We've been at these races for a number of years now and this time, we gave away two bursaries to Irish racers, 1 male and one female.
In order to give all the Irish racers a chance, these prizes were drawn, rather than given to winners of categories.
The two lucky winners were:
Emily Ainsworth and Alex Doogan. These guys won a weeks training package with us over the winter.
There was some great racing at the weekend, despite the weather!
With rain ALL day on Saturday and even some fog later in the day, the Dual slalom was interesting as you couldn't se the top of the slope from the bottom!
The rain eased off overnight and it was reasonably dry on Sunday, with low cloud visible over Dublin bay from the top of the hill.
The Mens race on Sunday saw what was probably the tights finish we've seen this summer with only 5 hundredths of a second seperating the top 3.
Tom Hales, 1 hundredth ahead of Gerard Flahive who was 4 hundredths ahead of Andrew Watson.
The slope itself is set in some great countryside and, even with the wet weather, it was a great weekend.
Posted by Phil Brown at 12:33 No comments: