With a very early morning, we went to inspect the super g at dawn. This was to ensure that we got the best of conditions and best chance to complete the race.
The early start paid off and we got a good race out of it, completing the race meant that we had the junior super g and the super combined in the bag.
Impulse athletes had mixed fortunes with 3 going out at different parts of the course but 2 completing. Elliot completed the super g, dropping his points in the process and Matt Thompson was 3rd Bit in the sg (2nd junior) and 3rd Brit (1st junior) in the super combined, giving him 2 junior titles so far.
Rain this afternoon but should be clear tonight and the mens national champs slalom tomorrow.
Posted by Phil Brown at 21:20 No comments:

Well, as expected, this morning arrived with the rain still falling at village level, meaning that the junior downhill was cancelled. This was good news for Impulse member Matt Thompson as it meant the junior results would be taken from yesterdays senior race, giving Matt the British Junior downhill title!

With the DH cancelled, came the decision to run the slalom leg of the super combined. The organisers got to work setting, and salting, the courses on the Meribel stade. The rain was easing by now and would soon stop. Inspection had to be made from outside the course to give the salt some time to work on the snow.
The race itself was very good, considering the conditions and the snow held up well. Our trainees performed well with Matt Jessop moving up to 33rd from a start number of 50, Ed Fenton-Fowler was unlucky at number 71 and fell about 20 gates down. Sam Fairbairn finished in 26th, making the top 30 flip for the super g run but was subsequently disqualified for incorrect passage of a gate which was a great shame as it was his run of the season so far!
Matt Thompson continued his successful run with 12th overall, 3rd Brit and 1st Brit junior. This gives him a good position in the super g tomorrow to capitalise on and, hopefully remain in this position (at least).
Early starts all round for a 7am inspection for the super g leg tomorrow. Here's hoping for another good race.

Slalom Training whilst the Downhill is on

Today we woke to clear blue skies and colder temperatures (initially), so the Downhill training run went ahead, followed by the first Downhill race.
None of the guys training with us were competing but one Impulse member, Matt Thompson, was second Brit and first British Junior in the race, scoring his best FIS points for DH in the process!!

Elsewhere on the hill, we were training slalom. We had great conditions but it did warm up very quickly. The guys all skied well for most of the morning but we had to finish in the gates by 11.30 as the snow was deteriorating quickly by that time. 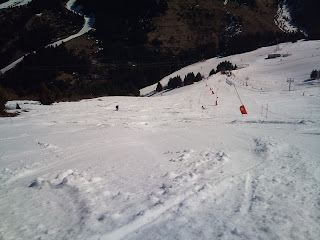 Tomorrow should be the second Downhill but we currently have rain and the forecast for tomorrow is not good. There is the possibility that they will run the slalom leg of the super combined if conditions prove too severe to run the DH. We'll see what tomorrow brings. If there are no races, we shall continue with some more slalom training.
Posted by Phil Brown at 20:53 No comments:

The downhill training was cancelled as we got out of bed this morning! None of our group were due to race, hence the later start but the others, who had got onto the hill for 7am, were disappointed.
We headed up high this morning with GS skis. No Gate training today but some technical training.
We found some good fresh snow above about 1800m, so the rain that we had for many hours yesterday turned to snow higher up.

After about two hours with the GS skis, the temperatures and high humidity started having a detrimental effect on the snow so we went and grabbed the SL skis for a couple of runs until the snow really changed, so we decided to call it a day and head back to prep skis for SL gate training tomorrow morning. 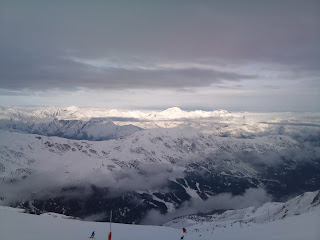 Back in Meribel again!! for the British champs. With warm weather and poor snow conditions the norm for the races here at this time of year, this season has not seen a change to what we expect.
I skied on Friday and we came off the hill at 11.30 as it had become so soft.
So it was with trepidation that we got up for a 7am inspection on todays national champs super g. We were pleasantly surprised with colder temperatures and harder snow than expected.


The race start was dropped from it's usual place due to the previous weeks conditions and, with a depleted team due to the timing of these races against school holidays, we had 3 finishers out of four to start, with two of the guys, Sam Fairbairn and Ed Fenton-Fowler scoring their best FIS points so far!!
Tomorrow should see the downhill training but it has started raining at village altitude this afternoon.
None of our trainees are taking part in the downhill so we have two days training and potentially a rest day before our next race which should be the junior super G and super combined on Thursday (conditions allowing).

3rd day in Les Houches today and first day of the races.

We've had 2 excellent days training here looking after teams from Surbiton High School, Kings College School and Sandown Park, amongst others - 24 trainees in total for these four days.
Today saw the first MInis GS with us grabbing two podiums from Abi Bruce and Toby Case there.
The girls slalom saw our girls improving their BASS points and the junior slalom saw another podium from Matt Jessop. 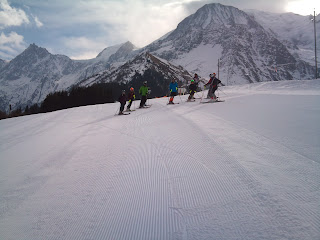 The boys GS was a little disappointing insofar as the second run had to me cancelled due to the soft conditions. 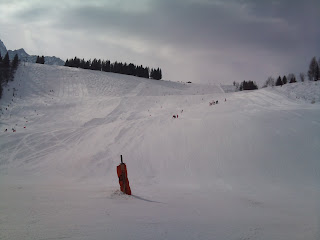 Tomorrow is the Boys sl, girls gs and second minis gs, so fingers crossed for some more podiums!! 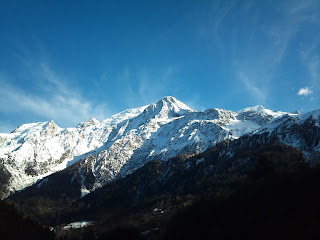 After the English Champs here in Bormio, I've been spending a few days at the SIGB ski test. catching up with some friends, skiing on some of next years kit and generally chilling out.

There are some interesting developments in the skis - The race skis remain largely unchanged, save for some graphics but there are some different directions taken by the manufacturers.
Salomon have the BBR. A ski which has a lot in common (shape-wise) with old surfboards. It has a wide but soft tip and a narrow, stiff tail. It works ok on the piste, if a little flappy at speed but is a little better when the going is softer off piste.
Head have a deal with the management of the rock group, Motorhead and have 4 skis aimed at all mountain and named after Motorhead albums. I've been skiing the 'Rock and Roll' which has proved to be a great ski both on and off the piste.

Today was my last of three days on the hill for the test and the weather has been amazing for all three with great conditions for testing.

Tomorrow sees me leaving Bormio to drive to Geneva then back to the UK for a few days rest.
The next trip will be out to the Interschools races in Les Houches with several schools and some of our regular trainees, following this will be the Aiglon cup in Villars so still plenty of the season left, even though we're now in March. 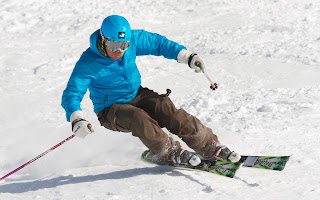